When I created Ludology.org back in 2001, there weren't almost no online resources for people interested in undertanding videogames from a critical point of view, bridging the game industry and the academia. Things have changed since then (boy, if the have changed!) Basically, I originally built Ludology.org because I needed something that simply was not available.

A few years later, I co-founded WaterCoolergames with Ian for the same reason: I wanted a good resource on serious games.
My life has changed quite a bit in the last decade. For the last few years, I have focused more and more on my studio, Powerful Robot Games. Not that I have abandoned academia (I wrote my PhD dissertation which I should write in book form one of these days) but making games certainly took a toll on my blogging. As you have noticed, I haven't posted much in the last couple of years. I don't plan to shut down Ludology.org but don't expect monthly updates either.
Today, I'm launching a new blog, in Spanish. As you know, it's my mother tongue and, after spending most of the last decade in the US and Europe, I'm finally back in Uruguay. I think there's a need for a good online resource on game research and design in Spanish. Certainly, there's plenty of good stuff now in English and certainly that's the current lingua franca.
Still, it makes a huge change to think and read in your own language. And we all know that Spanish language and culture kicks ass and run circles around the ones in the Northern hemisphere (yup, it's taunting time :P Seriously, I have high hopes for the videogame industry in Latin America and Spain, even if it hasn't taken off yet.
So here I am, anouncing www.Ludologia.org, mi new blog about videogame theory and design, en español. 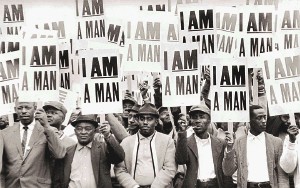 Yesterday, the signs simply read “I am a man”.

In 1968, there was a huge strike and civil rights demonstration in Memphis, Tennessee. Everybody carried a sign that simply read “I am a man”.

I think about it and I can’t find a most basic demand than this. None. When somebody has to write down a sign to remind the world that he is a person it simply means that all remains to be said.

So many new hands have repainted these same signs for the last forty years. So many new hands wrote and rewrote messages against war, torture and “anything goes” capitalism. Coat over coat of paint, shout over shout, painted and repainted over the very same signs carried by people who wanted to tell the world that they simply were men and women.

I had a great time at the Homo Ludens Ludens exhibit and conference at Laboral, in Gijón, Spain. For those of you who can understand Spanish (or should I say Spanish with an Uruguayan accent), I did a short report for my radio column at El Espectador radio in Uruguay. It includes an interview with Laura Baigorri, co-curator of the exhibit. You need Real Audio to listen to it. I'm currently in Murcia, Southern Spain, for the Cartoon Digital seminar. I'll be in Madrid later this week, so let me know if you're around!

The Sims and the multiplayer dilemma

The Sims is now 8 years old and the New York Times has an interesting review of the series. There was a time when no serious newspaper would write about videogames. Now the New York Times reviews The Sims as a major milestone in recent pop culture. Among the most interesting observation from the article is that players see their play sessions as something very personal and private. This is very interesting, even though it may not be true. It may be just a lame excuse to justify the disaster that was The Sims Online, arguing that The Sims just does not work in multiplayer mode. But again, it may be also true (similar to the experience that players had with the Eliza chatbot during the sixties). I'm not sure about it. What I'm 100% sure about is that The Sims Online failed because the designers shifted from third person to first person. The Sims are not and should never be avatars, as they were in the online game. The Sims were born to be surrogate slaves to our dreams and fantasies.

Learn from the masters

Here's a unique chance to learn from two of today's most talented media artists. There's an open call for projects at MediaLab-Prado in Madrid. It's an advanced workshop where you'll get the chance to work with, among others, Alvaro Cassinelli and Julian Oliver. The workshop takes place from May 30 til June 14th. There is also a Call for Papers for an event taking place the first two days. Ok, we all know that we can't trust tabloids. And of course, I can't trust a tabloid that manipulates images for journalistic purposes. And nobody should trust any publication that sucks at photoshop like this. But this is too much: nobody at the freaking website noticed this image? (it has been online for almost two weeks now).
Anyway, the article is, not surprisingly, about how violent games are and how they must be kept away from kids (something that could have made some sense if they took themselves seriously).

There are a lot of people in hardcore, but we have everybody else! I used to think that the whole games & violence issue was over or that at least I should not waste my time on it. However, it may be dead but its corpse is still breathing! Part of the growing pains of videogames going from mainstream towards pervasive cultural activity is that you still have to convince people with little videogame experience that it's quite hard for videogames to actually harm players.
It's now the turn of writer Stephen King (or Esteban Rey, as I used to call him when I was into his books, about 20 years ago) to point out the stupidity of laws banning the sale of violent videogames.

Jet Set Radio - Still tastes great after all these years I re-plugged my Dreamcast after many years of being abandoned at my studio. Actually, it wasn't abandoned: many of the guys at Powerful Robot took it home to give it a try.
The first CD (actually, GD-ROM) that I popped in was, of course, Jet Set Radio (known as Jet Grind Radio in the States). Sadly, the copy was so badly scratched that it would not run. I had to settle for the also excellent Space Channel 5.
I downloaded a torrent with JSR and, after a little tinkering, I was able to run it on the console (the original copy may now be a coaster, but it's one of the coolest coasters in my house). What a great game! The gameplay is good (a bit tricky to pull out some stunts) but the visuals and sound are still among the most impressive and distinctive to be found in videogames. Cell-shading may be commonplace, but JSR's visual choices (mainly the color palette and character design) have yet to be matched.
One of the things that keeps surprising me every time that I play old games is that I seem to master them much faster than before. I reached the 5th level in JSR after a couple of hours... that took me a couple of days when I first played the game. And this is not just because I mastered the game previously, since I have been able to easily win games that I abandoned years ago because they seemed too difficult at the time. The obvious answer is that we do improve our learning on how to play videogames and that shows after a certain time. A clear example is Space Channel 5 (SC5). I've never been too good with rhythm games and I certainly had real trouble with this game, mainly because it doesn't provide visual clues like more recent rhythm games. However, my sense of rhythm must have improved after countless hours of DDR and Guitar Hero, because I was able to beat SC5's levels that I never reached before... on my first try.
In any case, the curious thing is that the Dreamcast did not make me nostalgic. Its better games have not aged at all. Certainly, there are fewer polygons but that was made up by the excellent character development (Professor K, Beat, Ulala, Seaman). Since games are generally reviewed rather than criticized, JSR did not become a milestone in game development because, except for being the first successful cell-shaded game. However, I would argue that it's one of the few games that combines insanely great graphics and sound and a very good (but not excellent) gameplay. As such, it creates an experience that is worth replaying eight years after it was created, not just by nostalgic SEGA fans, but by gamers in general.
I was going to write that "unfortunately", Jet Set Radio Future's lack of success in the XBox platform killed the franchise. On the other hand, sometimes it may be better for a game not to be rehashed over and over. In any case, JSR is an aesthetic masterpiece that still provides a very rewarding gameplay experience.

What do you mean Eliza's daddy is dead? Tell me more... Joseph Weizenbaum, father of the Eliza chatbot (it feels wrong to call it a chatbot, doesn't it?) died at 85. I remember as a young kid playing with Eliza, fascinated by the possibility of machine intelligence (and trying hard to believe in it in spite of having analyzed the code and realized that, well, I couldn't find a soul in those lines). The New York Times has a nice article about Weizenbaum's life.