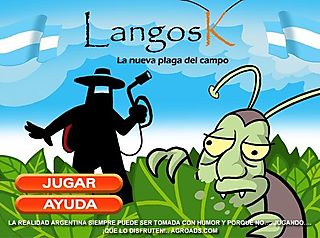 It's hard to overstate how f** up Argentinean politics is. Let me just say that Italian and Mexican politicians seem like panda cubs next to Argentinean ones. So, I'm not even going to try to explain the current crisis "across the pond" (as we say in Uruguay). I'll only say that farmers revolted against the current president. And I'll link to is to two games, one against the government and one against the demonstrators. The first one is a whack-a-mole, which is technically pretty decent taking into account that it is almost the default gameplay when it comes to political webgames (well, some will say that shooting moving targets is the default gameplay of most videogames, and I can agree with that). The second is about punching demonstrators and, as far as I can see, you can't win it. It may qualify, though, as one of the games with higher power-up respawn ever. A nice short list of some cute, old examples of advergaming (ok, the Burger King games for the 360 are not old at all but the Kool Aid one really made me smile.)