Pure beauty: Stick your finger in the hole.
Simply Signs 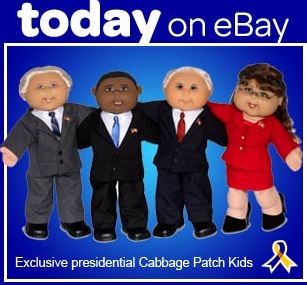 Dolls shaped after political figures at not new (I've written about this before). These versions of the current Presidential candidates in Cabbage Patch form are certainly cute (note: the original dolls, now 25 years old, were first manufactured by Coleco, creators of the Colecovision console and ADAM computer). Anyways, what caught my attention today were not exactly the dolls... but how much people were bidding on them. As of now, the lowest bid goes to Biden (no pun intended) with 610 dollars. That is not surprising. What is surprising is that Palin's doll gathered so far more money ($3650) than McCain ($1025) and Obama ($1225). Is this due to Palin's popularity (or maybe I should say "flamboyant unpresidential personality)? Or just because it's the online female doll? I'm not sure. It's telling that Obama is a bit ahead than McCain in terms of bids, even though not by much and this can be reversed any time. I would have thought that he would attract more bids, considering that it's almost a fact that he'll be the winner of the election (well, that is in the case that Americans finally get their Math right and learn how to count votes).
Cute dolls.

Do they value is calculated using money directly? But it is also very interesting! At least can entertain the crowds.
Nike shox shoes