2003 was the year of the first official videogame for a US Presidential campaign. It was called the Dean For Iowa Game. We developed that game in about two weeks (I can't think we could do that again even if we wanted). My good friend Ian had a contact with Dean's campaign, we two spent a couple of very long phone conversations until we figured out the basic design. Since then, there have been a few other official campaign videogames. Until a few days ago, when Republican nominee John McCain launched Pork Invaders, an official videogame about... shooting porks(!)

I'm glad about this game. Mainly because it's nice to see how videogames became such an important part of our culture that even elections take them (somehow) seriously. I'd like to say that even if my heart is with Obama, I respect Senator McCain. Ideologically, I think we couldn't be further away, but I like the fact that he often speaks his mind, and that's a very valuable thing in a politician. That being said, he needs some help when it comes to political videogames (don't look this way, McCain, I'd rather kill kittens before making a game for a Republican).

So, about Pork Invaders... For those unfamiliar with the political term, the answer is in Wikipedia. It's an expression about using government funds for private interests. And it's one of McCain's favorite topics. Ok, so far, so good. The game looks funny (it has piggies!) and it catches your attention. But a SPACE INVADERS clone! AGAIN? Come on, you can't be serious! Right after we launched the Dean game, the Republicans created Tax Invaders, a Space Invaders clone featuring Bush against taxes. This is the exact same game! Come on, McCain people, I know that Bush won the election thanks to Tax Invaders (sarcasm), but there are about 200 other classic games you could use. You can't pretend to not be seen as Bush's successor unless you come up with some original ideas! I'm sure even Republicans can code something better than Space Invaders.
As a sidenote, I'd like to mention the fellow game creator who did not only Tax Invaders, but most of the Republican videogames (I have no idea who crafted the McCain game, though). His name is Jeremy Lee Kenney and, even if he delved into the extremely, utterly dark side of the force by helping elect a War criminal into government, he's still a colleague and a pioneer. 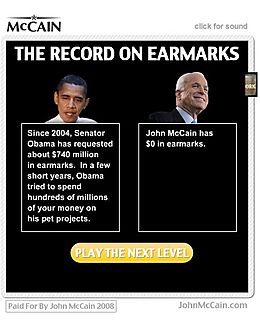 In any case, this 2008 game is far superior technically to the buggy 2003 Tax Invaders. It's graphics are more polished. It shoots "Vetoes" rather than bullets and the designers were wise enough not to include the candidate's head, like they did in the previous game. However, McCain's game is not exempt of bugs (notice the pork barrel graphic in the "Record on Earmarks" screenshot). Still, it includes HTML code so you can place the game on your site, and even in Facebook.
Long live to political videogames! And shame on McCain, ripping off Bush's lame and old videogame. This little piggy could have tried a little harder...

I eagerly clicked this link (first place, no less, on a Google 'ludology' search) anticipating an eloquent and informed academic site discussing video games. I was not expecting low brow politicised nonsense.
Why did I hold these expectations? Because you introduce yourself as a "resource for academic videogame research". A high standard that you just pissed all over.
I don't mind your silly Space Invaders game, and you are right to say it is smoother than the original (though I think the 'pork barrel' flying saucer is a bit easier to hit in this one.) Just don't say you are what ya ain't. Politics such as this is about as unacademic as you can get.

Sorry to hear that my site was a disappointment to you. I'm not going to defend myself. My blog, for better or for worse, gives a fair idea about my standards and record.

The good thing is that, nowadays, there are plenty of other resources from colleagues that you may find useful.

In Joss's world, there's no room for politics in thought, nor for thought in politics.

BTW, I'm getting a "McCain for President" banner ad on the side of this page, ironically enough.

my brothers and I consider ourselves lovers of video games and a few days ago we visited the blog and saw the story and look at the game and we played and we felt very good.