"The elegant art of feminine conflict" 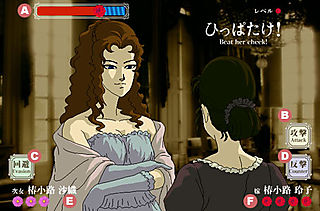 Oh, the pleasures of 19th century literature... Well, at least of the juicy parts of it. From Japan, with love, comes the slapping contest game. Simple and beautiful. It's called Rose&Camellia. It was created by a Japanese studio called Nigoro. You must keep an eye on them, mainly because they are also the creators of this very polished game called Mekuri-Master where you have to lift the skirts of the girls you meet. You even get to chose the kind of panties they are wearing. I know, it may sound Japanese-perv-creepy and it probably is, but it is also a lot of fun. When I was a kid at school, all girls wore skirts and if any boy caught just a glimpse of her panties it was the ultimate humiliation for her. I bet this game would have been extremely popular among my then 7 year old classmates (some may argue it may be too popular among 40+ men, though).

All the games are done in Flash and use mouse movements simulating gestures. If somebody had any doubts that webgames are still the place where game designers can truly experiment, then all that s/he needs to do is play these two wacky Japanese examples.

Might this be an appropriate time to pimp my own take on it from last August? That's at http://legoschnoz.blogspot.com/search/label/lolthreepwood